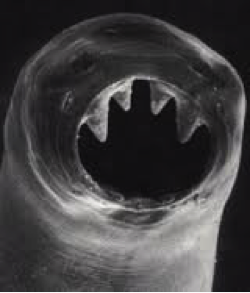 Get excited people! Today we’re gonna be talking about the creepy crawlies that could be lurking in your pet’s poop. You might want to put that taco or cup of cold brew down for a moment to read this…

Puppies and kittens are notorious for carrying roundworms and hookworms. Both of these parasites can be passed to them from their mother at the time of birth and nursing. Most shelters and breeders will give multiple doses of dewormer for this reason. Roundworms live in the intestines and feed off nutrients that your pet takes in, so often they will lose weight despite good food intake. Part of their life cycle involves entering the lungs and being coughed up to enter the GI system, so if your pet is coughing but doesn’t have diarrhea it is a good idea to check for these anyway. Hookworms live in the intestines and suck blood, often causing pets to become anemic and weak. (See their “fang like” appearance under the electron microscopic above!!)

This is the intestinal parasite that you are most likely to see with your naked eye. They look like grains of rice in the poop, or when they are dried they look like sesame seeds. The only difference is they also move! There are two different species of tapeworms we commonly see; one is spread through ingestion of an infected flea and the other is through an infected rodent. The tapeworm segments aren’t directly infectious to you or me, they are just disgusting to deal with.

(Tapeworms segments drop off the end of the worm and come out in your pet’s poop!)

These guys are sneaky, as they live in the cecum, or appendix, of your pet’s colon but can be difficult to find on a regular fecal test. They may cause blood in the stool or no symptoms at all. If we suspect them we might give a broad spectrum dewormer just in case. Luckily there are only rare possible cases of these parasites spreading to humans.

I lumped these two parasites together because they are both protozoa, which is more akin to a bacteria. Giardia can be picked up in all the lovely waterways we have here in Austin, and coccidia we often see in densely populated areas like shelters and catteries. Both of these parasites cause really bad diarrhea and weight loss, and there are specific treatments for each one, which is why it’s always important to actually run a fecal test through the lab and know which parasites we are treating and which dewormer is appropriate.

Here’s why all of this is so important: Four out of those 6 parasites are zoonotic, meaning they can directly infect YOU too! Roundworms, hookworms, Giardia and Coccidia all spread through fecal-oral contact, so if you don’t practice picking up after your pet or washing your hands well, you could get infected with these parasites too, and we definitely don’t want that!

What can I do to prevent them?

Make sure to keep your cat or dog on a monthly flea and heartworm prevention. All of the products we carry will protect them from roundworms and hookworms for sure, and if they are on regular flea prevention they shouldn’t get tapeworms but occasionally it does happen if they eat a flea before it dies or eat a rodent. There aren’t good protectants against Coccidia or Giardia, which is why it’s always a good idea to bring in a fecal sample for testing any time your pet develops diarrhea.
The Companion Animal Parasite Council also recommends a whopping 4 fecal tests in the first year of your pet’s life and twice yearly thereafter. Wow. While we don’t require that much, it is a really good idea to at least “check the poo” annually, so please remember to bring a sample with you when you bring your pet in for their annual exam and vaccines!

Well that’s the scoop on poop, which is like 90% of our day in veterinary medicine ☺. So don’t be embarrassed when you have to bring in a sample for testing or if your pet has an accident in the clinic. It happens!!

HERE WHEN YOU NEED US.

We will see ya'll at 10am tomorrow! Then back to t

Change of plans! With all the ice and power outage

All Paz Locations will open at 10am tomorrow for a

Isn't Bacon just the most handsome of mans in his

Due to inclement weather and safety of our clients

Apollo the Frenchie's eyes are Poppin in front of

Is this a joke to you?

Have you ever seen a baby chow chow? Feast your ey